The Keyport slide: Pain in the ass to buy, but nice once you have it 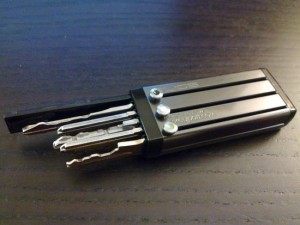 Let’s face it … keys are annoying. There may be a day, friends, when we can use biometrics to sign in everywhere … but that day is not here yet. In the meantime, we get by with lots and lots of keys and key FOB’s.

Keys, and the associated rings that they hang off of, are not particularly well organized objects. The key itself is a flat metal piece with lots of pokey bits. Then the head goes onto a ring in a perpendicular fashion, which just makes the whole thing take up more space and fit awkwardly into your pocket.

Women carry around purses, so big key rings tend to be a little more OK since they just go in a big bag.  Although, we all know that those keys end up scratching up everything else inside that purse.

Men, with just jeans pockets, value their pocket space. A key ring, with all of its jabby bits, occupies lots of valuable pocket real estate. Enough, in fact, that we have to pick and choose the keys we want to carry around, lest we leave imprints of keys in our thighs and worn holes in our pockets.

Is there a better way? Yes.  It’s called biometrics!

Oops … as I said earlier, we’re not quite there yet. So enter the Keyport Slide 2.0 … the next best thing. Born of necessity (apparently, motorcyclists don’t like large gangly keychains banging around their ignition either), the Keyport Slide tries to solve the eternal problem of the colossal keyring.

The Slide accomplishes its magic by allowing you to fit 6 keys into a compact space barely larger than a Tic Tac box. It does this by using custom blanks and fitting them into a custom plastic container. Holding each key blank in place are spring loaded buttons that allow you to “slide” the key out when you need it.

Sounds great, but how do you actually get one!  Suffice it to say, the rubber meets the road a bit awkwardly.

1. You have to take pictures of every key on a paper template and mail them in so that Keyport can tell you what you need to do with each key.

2. If you’re lucky, all of the keys will have standard blanks that can be mailed to you. If you are unlucky, some of the keys will require custom duplication by you, which must then be mailed into Keyport for custom fitting. In the case of auto keys, you may additionally need to select and mail in a copy of the key with the key transponder that is inside the auto key so it can be custom fitted into the Slide.

2.1. You can pick additional gadgets to fit instead of more keys.  USB drives, pens, lights, etc.

3. Mailing keys in requires printing of more forms, and the willingness and trust to send the keys to your stuff in the mail to a company. You may also need to pay your dealership good money to make a copy of your car key before you mail it in. What a racket!

5. When everything comes back, your custom keys will be ready, but you will also receive the standard blanks. Those need to be taken to a locksmith and duplicated by you.

6. Finally, you’ll have everything you need to assemble the slide. Tiny spring loaded buttons, blanks, and the key transponder goes in on the side so it doesn’t take up a spot.

As you can tell, this ends up being more like 80 to 100 dollars in parts from Keyport, 20 or 30 in service from a locksmith, and perhaps 80 bucks to get another car key made. There’s also all the time spent in visiting the post office, locksmith, filling out forms, etc.  Not cheap, and certainly not a one stop shop process. In addition, the website isn’t all that clear or consistent about exactly what you need to do, so expect to spend some time muddling around trying to understand what it is you need to buy.

I have to say that, despite the unfriendly process of purchasing the Keyport Slide, the final product is quite worthy.  And, in its defense, the difficulty is mostly by necessity … I can’t think of many ways to make the buying experience better that wouldn’t drastically increase the cost.

The weight of the Keyport Slide, fully loaded, as compared to the keys it replaces, is reminiscent of moving from the iPhone 4S to the iPhone 5. It feels almost ethereally light for something that holds six keys. Physically, your hand gets a bit confused … where did the weight go? It turns out that the metal heads of each key contribute significantly to the overall weight of your keys. Remove the heads and just keep the keyed portion, as the Slide does for you, and you have a very light set of keys!

The form factor allows you to fit six keys, with three buttons to each side that latch and unlatch the keys to slide them.  This has allowed me to put in keys that I don’t normally use, but which are really a problem if I forget them.  Great peace of mind.

One decision I had to make was in regards to the car alarm.  As you probably know, car manufacturers have gone down the consumer unfriendly road of making their FOB’s larger and bulkier than ever before … all so that you can “unlock your car without a key”.  To keep it simple, I’ve had to let go of using the alarm fob.  Instead, I simply physically lock/unlock the car with the Keyport.  This works, and it also disables the alarm even if it is set, thank goodness.  I felt that the annoyance of having to carry the giant key and alarm fob in my pocket (constant) was greater than the annoyance of having to unlock the car door manually and lock it with a button (couple of times per day).

The Keyport also sits rather large in the ignition of the car.  It’s not heavy in the ignition by any means, which is good.  But it does feel a bit awkward when twisting the key to get the car started.  The plastic slide juts out further from the ignition than most key sets would.

The entire process of purchasing is a pain, true.  But I take real joy in not having to remember which keys to bring.  It’s also even better not having a large, weighty, and sharp metal mass in my already tight jeans pockets.  I enjoy the benefits of the Keyport every day.  Recommended … if you are willing to put up with the hassle of ordering and getting keys duplicated.

This entry was posted in Lifestyle. Bookmark the permalink.